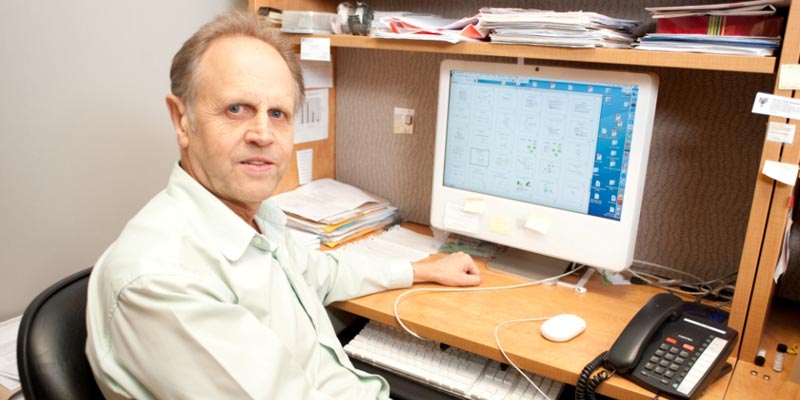 In Dr. Robert Anderson’s lab the focus is on:

In Dr. Roy Duncan’s lab the primary research focus is directed toward the structure-function analysis of a new family of viral membrane fusion proteins discovered by my research team. The reovirus fusion-associated small transmembrane (FAST) proteins are the only known examples of membrane fusion proteins encoded by nonenveloped viruses. We believe that the unusual structural and functional properties of the FAST protein family will offer new insights into the mechanisms responsible for protein-mediated membrane fusion, an essential biological process involved in such disparate events as muscle cell differentiation, intracellular vesicle transport, bone development, neurotransmitter exocytosis, embryogenesis, fertilization, and virus-cell interactions. We are also developing a novel fusogenic liposome delivery system based on the FAST proteins. These FAST-liposomes may serve as an improved vehicle for the intracellular delivery of therapeutic drugs, genes, and vaccines.

Dr. Todd Hatchette’s main area of interest is Influenza A and diagnostic virology. He has an active collaboration with Dr. Craig McCormick in the department of Immunology and Microbiology focusing on studies examining host restriction and the interaction of influenza A and the innate immune response at a cellular level.  As a member of CCfv, Dr. Hatchette is collaborating the a local biotech company investigating a novel vaccine delivery system using influenza as a model.  As the director of virology and immunology at the QE II Health Science Center he is also involved in clinical research and public health projects. Current projects include the evaluation of new molecular tools such as real time PCR to diagnose respiratory viral infections to help understand the epidemiology of respiratory viruses.  In addition he has an interest in seroepidemiology and is looking at the seroprevalence of emerging Zoonotic infections such as Lyme disease in Nova Scotia as well as collaborating with other researchers across the country who are interested at examining the seroprevalence of vaccine preventable disease such as measles, rubella and VZV in Canadians.

Within the Vaccine Discovery Group, the division of Bacteriology and Molecular Biology is comprised of laboratories led by Drs. Song Lee and Scott Halperin. Collectively, their research groups focus on investigating new pertussis vaccines that can be delivered mucosally and the use of adjuvants (ex. DNA sequences, proteosomes, liposomes) to illicit immune responses. Drs. Lee and Halperin are also investigating the commensal Streptococcus gordonii genetically engineered to produce vaccine antigens, and the use of these recombinant S. gordonii to elicit immune responses in an attempt to generate a live oral vaccine against childhood diseases, such as pertussis. A number of approaches are being taken; these include surface-localizing the recombinant antigens to the cell wall, fusion of the antigens to the mucosal adjuvant cholera toxin subunit B, the use of immunostimulatory DNA sequences, and specific targeting of antigens to dendritic cells.

The laboratory of Dr. Chris Richardson works with several viruses including measles, hepatitis B, and hepatitis C viruses.  He is particularly interested in identifying and characterizing the cellular receptors for these viruses and developing animal models for studying viral infections.  These small animal models can be used to evaluate both vaccines and antiviral drugs for viruses that are normally primate specific.  He originally identified CD46 as a receptor for vaccine/laboratory adapted strains of measles virus and later showed that human CD150 (SLAM), which is found on the surface of activated lymphocytes, is a receptor used by wild type isolates of measles virus obtained directly from the throats of infected children.  His laboratory has developed transgenic mice that express human CD46 and CD150 gene products and subsequently support measles virus infections in these animals.  In addition, the vaccine strain of this virus can be reverse engineered from DNA templates to produce recombinant viruses expressing the antigens of HIV, hepatitis C, hepatitis B, West Nile, and influenza viruses to produce multivalent attenuated viral vaccines which can be evaluated in these mouse models. This laboratory is also working with hepatitis B and hepatitis C viruses, which are extremely difficult to grow in culture.  Components of the innate immune system, such as IRF-3, appear to inhibit the growth of these viruses in tissue culture, and the laboratory is trying to develop methods to propagate these viruses in culture and in small animal models.  Some members of his laboratory are also researching how the X protein of hepatitis B virus interacts with cellular proteins such as p53, Bcl-XL, protein kinases, and a DNA repair protein (DDB1) in order for it to cause liver cancer.  Recent studies have focused on the role of DDB1, using a deficient mouse model which exhibits decreased cell proliferation, premature aging, and a predisposition to tumors.

Dr. Jun Wang’s lab is working on the development of a recombinant adenovirus-based mucosal vaccine against respiratory and genital chlamydial infection, and dissecting the role of T regulatory cells in regulating the host responses, specifically the CD4+ Th1 and CD4+ Th17 responses, to a respiratory chlamydial infection. Dr. Wang is also collaborating with Drs. Song Lee and Scott Halperin to investigate host factors in regulating immune responses to recombinant pertussis vaccines that are based on a commensal bacterium Streptococcus gordonii.